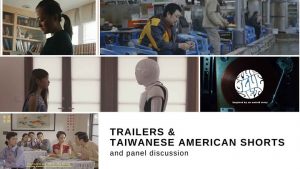 Kick off the inaugural Seattle Taiwanese American Film Festival with trailers of our featured films, and shorts by Taiwanese American talents. Followed by a panel discussion. The short films selected are Pool to Table, Color Positive, Never Let You Go, Patriotic Lottery, and The Blue Jet.

AR and VR equipment for Taiwanese traditional puppetry (from Father 紅盒子 film) will be available this event!

This is a free event, but tickets are required! (Get free ticket on SIFF website: https://www.siff.net/year-round-cinema/seattle-taiwanese-american-film-festival-x21376 )

Shorts synopsis:
Pool to Table – Director: Tim Cheng. A documentary short about indoor shrimping, an all-ages pastime that’s found a following in Taiwan over the past three decades.

Color Positive – Director: Jessie Lee. After her father passes away, an emotionally distant woman returns home, only to struggle for closure.

Never Let You Go – Director Remii Huang. Emma bought her mom a robot to help her recover after a major car accident.